The route with a beautiful sea view and the city center
The Helsinki City Marathon route was renewed in 2015 and it has received excellent feedback since then. The route has been planned based on the feedback from the runners, in close cooperation with the City of Helsinki. The route is relatively flat and comfortable to run. Furthermore, the runners can avoid hills towards the end of the race. Moreover, the last eight kilometers of the route are run on flat, paved road which makes the course smoother and helps runners to break their personal records. The Garmin Helsinki City Marathon’s route offers beautiful views of the sea, Helsinki’s city center and parks.

Welcome to Helsinki on May 16th, 2020
The Helsinki City Running Day wishes you a warm welcome to experience beautiful Helsinki in fresh spring weather (average in May +15 C), with great atmosphere and great service. We hope to have you in Helsinki in May and celebrate the 40th anniversary of Helsinki City Marathon! 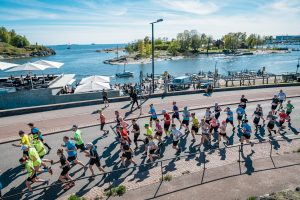