The Republic of Estonia’s 100th birthday celebrations are well underway and notable events are taking place across the country. Tallinna Maraton is dedicated to the country’s 100th birthday this year and the event is also part of the official EV100 sports programme.

“The birthday year gives Tallinna Maraton a special aura. Together with runners, we want to have a grand celebration in honour of the country’s jubilee. We are planning several innovations and we’re not denying that together with all the good people fond of active lifestyle, we intend to organise the largest running event of the century in Estonia!” says the manager of Tallinna Maraton Mati Lilliallik.

This year’s Tallinna Maraton is special because the organisers expect the participants to race wearing the flag colours – blue, black and white. “We haven’t set a common dress code previously, but we are suggesting it this year to provide an element of magnificence and unity to the event. We are also considering the fact that we have many foreign participants and the sea of runners in blue-black-white would put Estonia on the world map, create an aura of unity and show that being an Estonian is a strong brand,” says Lilliallik. “It’s going to be a truly awe-inspiring and marvellous spectacle if thousands of runners dressed in blue, black and white gather at the starting line and flow across the streets of Tallinn in one flag-coloured mass,” he believes.

The organisers try to help everyone who want to obtain running gear in flag colours. For the first time ever, running shirts in the national colours of Estonia will be available at www.jooks.ee.Marathon runners will get the shirt for free, those registering for the half-marathon or the 10 km distance will get a chance to buy the shirt with a 50% discount. The shirts will be available from 24 February, that is the 100th birthday of Estonia.

Tallinna Maraton will take place from 7 to 9 September 2018. The major sports event is kicked off with the We Run Tallinn youth race on Friday, following the kids’ races and the 10 km run on Saturday and culminating on Sunday with the marathon and half-marathon. 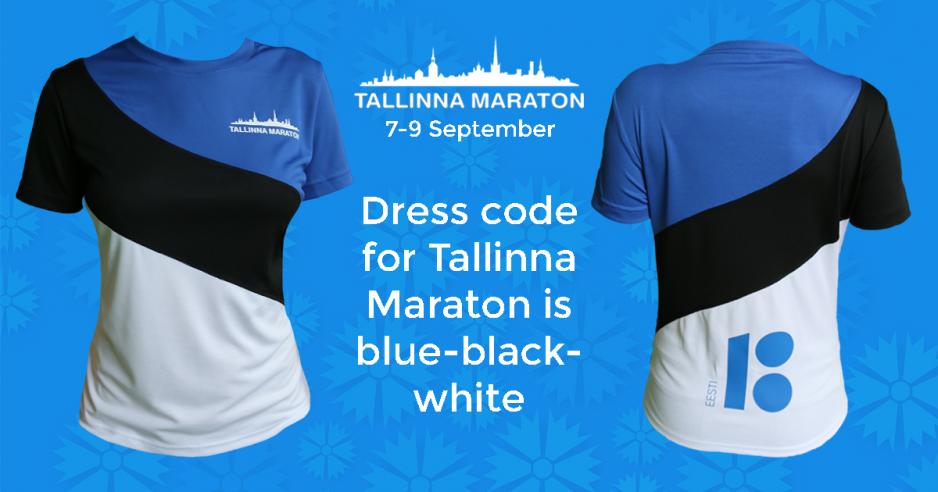