HOW TO SCORE POINTS

The maximum points that can be scored in any race by an age group winner is 4,000. The age group winners in any AbbottWMM race – the Tokyo, Boston, Virgin Money London, BMW BERLIN, Bank of America Chicago and TCS New York City Marathons – will automatically get 4,000 points.
Any age group athlete who is within 29 seconds of the age group winning time in an AbbottWMM race receives 10 points less, earning 3990 points. Runners within 30-59 seconds of the winning time receive 20 points less, and those earning times within 1 minute and 29 seconds less than the age group winning time receive 30 points less, and so on.
Runners can earn points for their performances in marathons beyond the six AbbottWMM races, provided the event is an official AbbottWMM Wanda Age Group World Ranking qualifying race. In those events, scoring will be based on a platinum time calculated for each age group and gender, using standard multiples of the ‘mean’ of the current marathon world record times for each age group and gender. Winners of any age group marathons that are not Abbott World Marathon Races must run faster than the platinum time for their age and gender to score 4000 points. The same points degradation according to time behind the winner applies. The full list of the platinum times is included below.
Runners’ qualifying times must be recorded at a certified accurate marathon which has been nominated as an AbbottWMM Wanda Age Group World Ranking qualifying race. The current list is included at the conclusion of this document. If the age group winning time is below the platinum time, then the points awarded to the winner and every subsequent age group runner are reduced by the time the age group winner has missed platinum time for the age and gender of the athlete.
Platinum times for each age group are as follows:

Best male and female runner will receive special prize and the possession of the trophy.

Also following placements are rewarded with a product prizes:

The winners of the open classes will be rewarded directly after the race at the finishing area. Other winners can collect their prizes from the Race Office at Olympic Stadium.

In the year 2020 there is no pace makers because of the safety arrangements.

Pace makers help you to keep up the steady speed during the whole event. These experienced runners are wearing flags with the finishing time and bright coloured vests and they will run the whole route with a steady pace.

If you have personal refreshments, please bring them to the marked boxes next to post- and 2021 registration tent (outside, near the expo entry) between 8 AM and 12:30 PM on the race day. See the map below.

PICKING UP THE RUNNING NUMBER

Marathon will have two starts (corrals) at 2:30 PM and at 2:40 PM outside the Olympic Stadium (south) next to the statue of Mr. Paavo Nurmi on Mäntymäentie street. Both starts will have three start waves divided by colors: blue, white, yellow.

The start times and start waves have been sent to runners one week before the event. You can also see your start time and color from your bib number.

The runners should be at the southern Olympic stadium square (start area) at 2:15 PM the latest.

The start corrals and start waves have been made according to your own expected finishing time. If you haven’t given your target time yet, you have to do it before 14th September at your runner’s profile. Otherwise your starting wave will be given randomly.

Helsinki City Marathon route was renewed in 2015 and it has received excellent feedback since then. In 2020 the route will run along the same scenery but it now runs clockwise and finish at the reshly renovated Helsinki Olympic Stadium. The route has been planned based on the feedback from runners, in close cooperation with the City of Helsinki.

The route has two laps where first one is longer, having a approximately 7 km loop in the Southern end of the city. The second lap is the same than first excluding the south loop.

The route has several service points and it offers nice spots for spectators to cheer the runners on. Many sights of Helsinki are also located just next to the route. Everyone runs in the same direction the whole time, which makes running smooth and safe.

The route is relatively flat and comfortable to run. The 2020 course is faster and smoother than before, avoiding some of the steepest and longest hills and tight curves.

The police and traffic controllers will be controlling the route. At some point, the vehicles might have to be let in between the runners and it might hinder the pace of the runners for a moment.

The iconic Helsinki Olympic Stadium renovation will be ready in summer 2020 which means  the postponed Helsinki City Running Day will be able to return to the Stadium already on October, 2020. 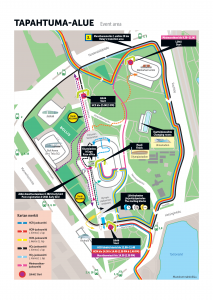 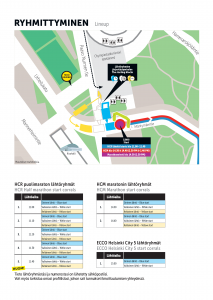 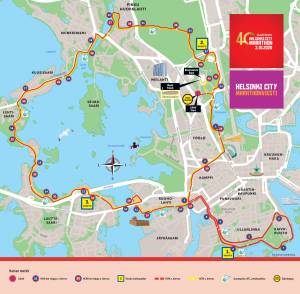 Back to general info